Published on 14 October, 2015 | Baden-Württemberg has resumed its historically good contacts with Iran through the much-noticed trip by a delegation of notable representatives from politics and industry (under the leadership of the Minister of Finance and Economics Nils Schmid and with participation of well-known companies such as Festo, Fichtner, Herrenknecht, Liebherr, Voith, SAP, ZF Friedrichshafen, etc.). Joining them was UNION Instruments, GmbH, as the only measuring technology manufacturer and tradition-rich specialist for gas measuring technology.

There was overwhelming interest in making contact with the German companies. According to press reports, interested parties "were lined up." UNION Instruments was also a sought-after partner for many interested parties, who were already well informed thanks to its new website. Bernd Renner, who is responsible for export promotion for the company, was thus able to establish an initial basis for future business relationships.

Business opportunities with devices and systems of UNION Instruments gas measuring technology may evolve especially in the areas of glass and ceramics, iron and steel, and of course oil and gas. Iran could thus become an important building block in the growing export business of UNION Instruments in the medium term based on first impressions. 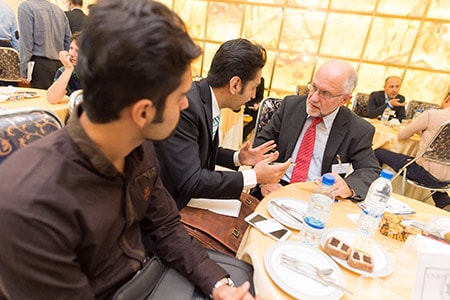 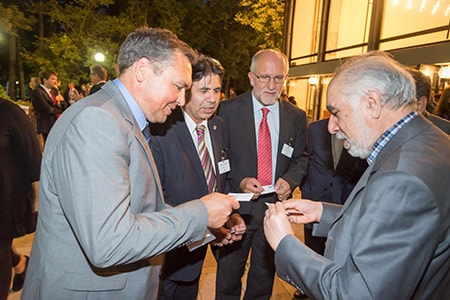 Export Promotion Manager Bernd Renner (in the back) with the Deputy Minister, Iranian Ministry of Petroleum (right), in the German Embassy in Teheran.

The Baden-Wuerttemberg delegation in front of the ISTT ( Isfahan Science & Technology Town) an incubator for “Start ups”.